What are Geo Experiments and how it is used in marketing

This will be a three-part series discussing the topic of Geo Experiments and it’s use in marketing.

Part 1: What Is It and How Will It Help You In Marketing?

Part 3: Application of Geo Experiments with examples and R code

The Bread & Butter of Test & Learn

A/B testing (aka split testing) has been essential in helping marketers remove the guesswork and make data-informed decisions. For most marketers, this comes in the form of landing page optimization. You split traffic into different groups, expose some changes to the page to one of the groups while keeping everything else the same for the other, measure the difference for a specific metric of interest (signup rate, CTR etc) and determine if the difference between the two groups is statistically significant. Some paid marketing specialists may have worked with A/B testing in Google Ads or Facebook Ads, where the audience is subjected to different ad formats or ad copy. Similar methodology for both but applied differently.

So why do marketers run A/B tests? This is where marketers put on their scientist hat. Marketers run A/B testing to understand the causal and incremental impact of something, whether it be a change on a landing page or ad copy for their Facebook campaign. They want to know, for this specific thing that they did, what is the incremental impact that it had, so that they can make informed decisions about what they should do next.

A/B testing has been the bread and butter for marketers to do tests and learn. But if I were to ask you to design an A/B test to answer each of the following questions, how would you go about doing so?

Give it some thought.

Let’s go through each question and see why our favourite A/B test doesn’t work:

A/B testing does not work when you do not have control over your population or have a direct measure of the metric of interest. Although A/B testing is the bread and butter for marketers we also see it’s limitations and the need for additional tooling to help marketers answer important questions.

Sometimes bread and butter just isn’t enough and you got to switch things up. Bread and olive oil usually goes well together too. So what exactly are Geo Experiments? Well, in the simplest terms, Geo Experiments are like A/B tests but uses geographies to define your control and treatment group rather than individuals or web cookies. In Geo Experiments, geographic regions are divided into treatment and control group. The regions in the treatment group are exposed to a marketing intervention while regions in the control group remain status quo. The marketing intervention happens for a duration of time and the response metric is observed. The idea is to detect if there is an incremental lift in the response metric in the treatment regions.

Let’s use the Facebook question above as an example and assume we are running the ad campaign in the United States. First, we randomize a set of cities in the United States putting them into treatment and control group. Just like A/B tests, randomization is a critical part of the experimental design. Then in Facebook Business Manager, we set the campaign to only run in the cities in the treatment group. We run the campaign for a duration of time and we measure the incremental customers acquired (agnostic of an attribution model) by comparing the difference between the control vs. treatment group. For example, we may see something like: 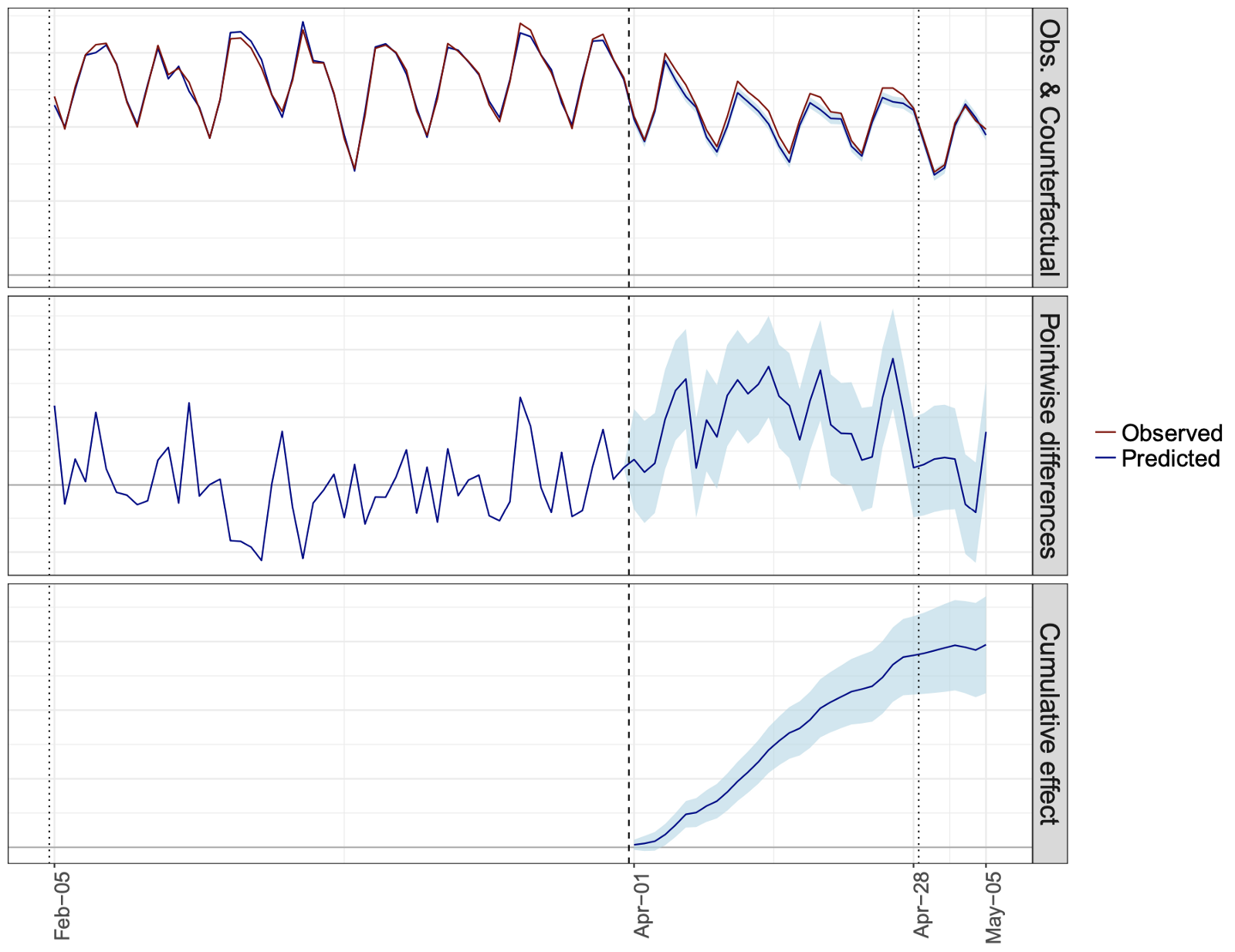 This is a graph produced by the GeoexperimentsResearch R package developed at Google which implements the Geo Experiment methodology and provides an easy way to perform the analysis. I’ll be demonstrating how to use this R package in Part 3! But at a high level, the y-axis can be customer conversion for our example purposes, the x-axis is divided into three distinct periods:

My explanation above is an oversimplification of the methodology. To truly understand what’s going on, you need to go inside the hood and look at the engine. The methodology and math behind Geo Experiment are different from a traditional A/B test but the overall idea is similar. As mentioned, I will be leaving the detailed explanation of the mathematics to Part 2 of this series. The methodology that I’ll be going through in Part 2 is research from Google, so if you are interested, take a look first. A one-liner explanation: a regression model is used to learn the exchangeability factor between the control regions and the treatment regions and then used to predict the counterfactual during the intervention period. Maybe this sentence doesn’t make any sense to you at all. Don’t worry, I will be breaking this down in simple terms! Stay tuned!

I want to take a short moment to highlight that Geo Experiments are another use case of regression in marketing science. If you haven’t read my article “Regression, a must have for Marketing Analysts”, take a look to see why regression is a tool every Marketing Analyst should have in their toolkit.

By no means are Geo Experiments designed to replace traditional A/B test. They serve very different purposes and answers different questions but both are equally important. Just as they say, “there is no one size fits all”, you shouldn’t just have butter with your bread. Go ahead and add some variety, olive oil is great too!

By now, I might have sold you on how great this new tool is BUT, like any other tools, Geo Experiment comes with its own set of limitations and challenges:

And finally, alway’s remember to choose the right tool for the right job. There is no one size fits all!

« Regression, a must have for Marketing Analysts Problems before tools: A story of the full-stack data scientist »
comments powered by Disqus

Never miss a story from us, subscribe to our newsletter